Travis Fimmel And MGK together for a new action-thriller.

One Way, an upcoming action thriller directed by Andrew Baird and scripted by Ben Conway. Colson Baker, also known as Machine Gun Kelly does a major part in the action thriller.

According to the sources, MGK whose life is in danger runs with a bag full of cash and cocaine after a robbery of his former crime boss goes wrong. However, Kelly manages to get on a bus with a potentially fatal wound. The rapper may have to face difficult situations while his journey to the unrelenting California desert. His life depends on the very few choices he takes while his boss and her henchmen hot on his heels.

Travis Fimmel has also worked in many popular TV shows, especially in Vikings and Ridley Scott’s Raised By Wolves. Also featured in movies like Warcraft, Maggie’s Plan, and Lean on Pete. Other than the new action thriller,  Zone 414 is another upcoming movie of him. 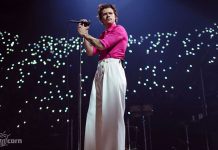 Harry Styles postpones all of his world tour dates in 2020