Chris Brown and Young Thug dropped the newest mixtape ‘Slime & B.’ The first-ever collaboration between these two skilled hip-hop stars is now available for streaming on Soundcloud.

It may be Chris Brown’s birthday is turning the tables and gifting fans with new music. On Monday, the musician-turned-actor shared the tracklist to his Instagram stories, which featured 12 songs.

Chris brown his tape with young Thug announces in early April. Initially, fans were skeptical about its release.

“Me and my brother @chrisbrownofficial did something special for you guys since this virus has everyone down.. Hope you like it lots,” Thug wrote on Instagram with cover art from the mixtape.

Me and my brother @chrisbrownofficial did something special for you guys since this virus has everyone down.. Hope you like it lots☺️ 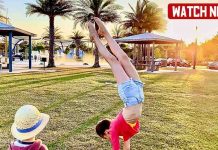 Billie Eilish Takes Off Shirt, at the concert in Miami

Allie Sherlock shared a message for her Patreons | Donate

Georges Allie Sherlock performs ‘When We Were Young’ by Adele